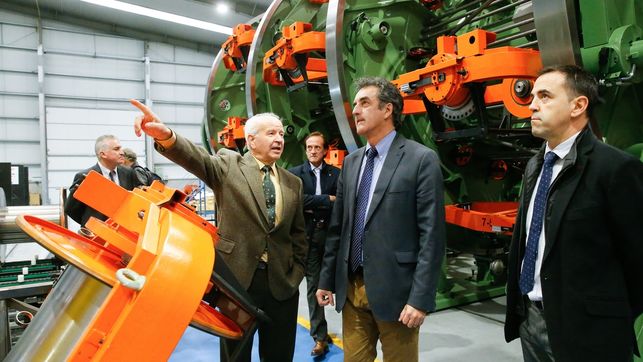 The Minister of Innovation, Industry, Tourism and Trade, Francisco Martín, met this Friday the submarine cable assembly company Flymca, located in the Morero industrial estate (Guarnizo), has manufactured for the new Nexans plant in South Carolina (United States), which will have a turnover of around eight million euros.

Martin has referred to this assembler as &quot;a Christmas gift”; and has congratulated the company on the success of its construction. With a hundred metres in length and several tonnes in weight, he will leave for his destination in January.

The CEO of the Cantabrian company, Julio Carrillo, and its director, Carlos Carrillo, have invited Martin to celebrate the completion of the manufacturing project that has lasted for a year.

The Minister of Industry has expressed his surprise and satisfaction to see how a company of family origin, &quot;a la chita quietly, almost without making noise”;, has managed to produce machines like this one that will manufacture submarine cables to be placed around the world.

Martín, who recognised that very few factories in the world can do things like Flymca does, congratulated the company and gave it as an &quot;example of constancy and quality”;, extending his congratulations to all the small and medium-sized entrepreneurs who continue to work for the success of their projects.

The Minister referred to the successes of Cantabrian industries he said, has led us to be the region of Spain with the highest rate of industrial production.

According to Flymca’s director, Carlos Carrillo, the delivery of this cable assembly plant is about to take place and is one of the most representative they have ever made. The machine is a assembler that serves to place the last layer of steel wires to high tension submarine cables between 300 and 350 millimeters in diameter.

After the steel wire layer, a tar layer is placed with polypropylene ropes, which is already the last covering of the cable to protect it from corrosion and, for example, from fish bites such as sharks. The cables that will be manufactured with the assembler are guaranteed for 10 years, although they usually last more than 25 years.

Flymca currently has between 65 and 70 workers. It was created in 1999, although its origins date back to 1962 as a company of the Carrillo family dedicated to building cable making machines. They started in a small plant until they were installed in the Morero industrial estate (Guarnizo) and later, in 2000, in a slightly larger plant of 1,700 meters.

Since 2012 they have moved to other facilities in Morero with more possibilities to grow and take on larger projects. Its market is mainly international, aimed at Europe, the United States, Mexico and South America, as well as other countries in Asia and Africa such as Indonesia and Morocco.

Among his plans for the future, according to the factory director, is to carry out important projects that highlight the presence in the markets and continue with standard products where the competition from factories in Turkey and China is very tough.

Flycam is a company dedicated to the construction of rotating machinery for the manufacture of cables and conductors for the energy sector; control and instrumentation cables; telecommunication cables, etc. It designs all its projects, as well as the installation and start-up in the place indicated by the client.

During Martín’s visit to the company’s facilities, in addition to Julio and Carlos Carrillo, the member of the board of directors, Roberto Vérez, and the technical advisor, José Miguel Manrique, have been present, and the regional government has been informed in a press release.